Born in 1974, Dr. Sternberg is senior physician of elbow surgery and, together with Dr. Leuzinger, is responsible for shoulder surgery at the etzelclinic. He finished his medical studies in 2002 at the Charité, at the Humboldt University of Berlin. After a short period as a surgeon in Germany, his career took him to Switzerland in 2003, to the renowned Schulthess Clinic in Zurich. After completing expansive training in the fields of orthopedics and trauma surgery, he had become a ​​senior physician at the Baden Canton Hospital by 2007. Since 2010, he has played an integral role on the etzelclinic medical team and among its partners. In addition to giving academic presentations and publishing, Dr. Sternberg has also been active as a physician of sports medicine, and has provided medical care to the Swiss first division ice hockey club (NL A) and during the Hockey World Championship in 2009. 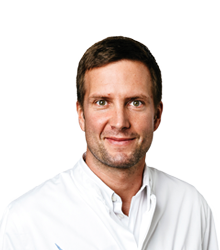