Born in 1972, Dr. Buchmann is part of the etzelclinic’s knee team and also responsible for prosthetic knee and hip joints. He studied medicine at the University of Zurich, taking his state examination in 2002. His surgical career began at Davos Hospital. Further stages of his general surgical training occurred at Wetzikon Hospital and Zurich’s Triemli Hospital, and also included work as a consultant at Lachen Hospital. In addition to specializing in surgery, in 2012 he decided to become a qualified specialist in orthopaedic surgery at the Schulthess Clinic in Zurich. In 2014 he qualified as a consultant for orthopaedics and traumatology at the Graubünden cantonal hospital in Chur. He joined the etzelclinic in 2017, adding prosthetic knee and hip joints to the clinic’s areas of expertise. He and Dr. Borsky together form the knee team, and he also joins Dr. Kather in the field of hip surgery. 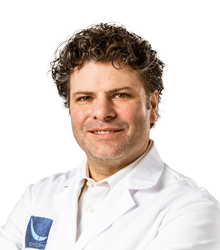